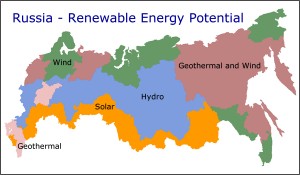 According to the research, a 100 percent renewable energy system for Russia and Central Asia would be roughly 50 percent lower in cost than a system based on latest European nuclear technology or carbon capture and storage. Renewable energy covers electricity and industrial natural gas demand, not, for example, transport or heating.

“We think that this is the first ever 100% renewable energy system modelling for Russia and Central Asia. It demonstrates that Russia can become one of the most energy-competitive regions in the world”, emphasises professor Christian Breyer, co-author of the study.

Such a renewable energy system represents a drastic change compared to the current situation. The modelled energy system is based on wind, hydropower, solar, biomass and some geothermal energy. Wind amounts to about 60 percent of the production whilst solar, biomass and hydropower are distributed evenly. The total installed capacity of renewable energy in the system is about 550 gigawatts. Slightly more than half of this is wind energy and 20 percent is solar. The rest is composed of hydro and biomass supported with power-to-gas, pumped hydro storage and batteries. In the present situation, the total capacity is 388 gigawatts of which wind and solar only accounts for 1.5 gigawatts. The current system also has neither power-to-gas capacity nor batteries.

The geographical area of the research covers much of the northern hemisphere. Many of the countries in the area are currently reliant on the production and use of fossil fuels and nuclear power. In addition to Russia, the researched area includes Belarus, Kazakhstan, Uzbekistan, Turkmenistan as well as Caucasus and Pamir regions including Armenia, Azerbaijan and Georgia, and Kirgizstan and Tajikistan.

One of the key insights of the research is that energy sectors’ integration lowers the cost of electricity by 20 percent for Russia and Central Asia. When moving to a renewable energy system, for example, natural gas is replaced with power-to-gas, i.e. converting electricity into gases, such as hydrogen and synthetic natural gas. This increases the overall need for renewable energy. The more renewable capacity is built the more it can be used for different sectors: heating, transportation and industry. This flexibility of the system decreases the need for storages and lowers the cost of energy.

Whilst this study focused on Russia, the fact that the modelling is showing that a large country like Russia can derive all its energy requirements from a wholly renewable source demonstrates that other countries need to seriously look at this. Granted, massive solar energy arrays in the southern Russian Steppes may be viable for Russia, but large arrays across the Home Counties or on the slopes of Ben Nevis is hardly viable for Great Britain. One energy source that is not mentioned in this report is tidal. For all its size Russia does not have ready access to large coastal area with good tidal regimes. Britain may not have the available land, but it certainly has a coastline and high current flows that is potentially available for large tidal arrays in the multi megawatt area. A United Kingdom study that seriously investigates all the potential tidal sites, (and here I would include Ireland) I suggest would produce a result not unlike the Russian study. That is that 100& of the United Kingdom’s power requirements could indeed come from renewable energy.