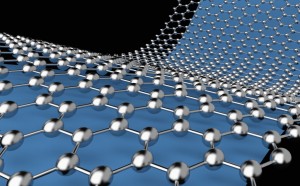 This new discovery by Chinese researchers has wider implications than proposed in the press release. Essentially the discovery allows solar panels to generate electricity when it is raining through a coating of graphene. When it is raining the sun is absent and the solar receptors cannot be excited but the raindrops themselves now generate electricity through this coating.

If the coating is stand-alone as a generator of electricity, then the implications for electrical generation are much wider. The day may be coming when roof tops are made from solar energy generating tiles and also produce energy when it rains. Every house could be self-sufficient in electrical energy, almost regardless of the weather.

If the graphene layer can be made transparent, then this could be coupled with the development from MIT (Reported in June 2013) of solar panels that are completely transparent. One could then envisage The Shard, or the Gerkin in London producing power from its entire surface. Also, the idea of the pyramid city rising out of the countryside becomes even more viable when the protective surface is both fully transparent and energy producing.

The following is the Press Release from Angewandte Chemie

Solar energy is on the rise. Many technical advances have made solar cells quite efficient and affordable in recent years. A big disadvantage remains in the fact that solar cells produce no power when it’s raining. This may change, however: In the journal Angewandte Chemie, Chinese researchers have now introduced a new approach for making an all-weather solar cell that is triggered by both sunlight and raindrops.

For the conversion of solar energy to electricity, the team from the Ocean University of China (Qingdao) and Yunnan Normal University (Kunming, China) developed a highly efficient dye-sensitized solar cell. In order to allow rain to produce electricity as well, they coated this cell with a whisper-thin film of grapheme.

Graphene is a two-dimensional form of carbon in which the atoms are bonded into a honeycomb arrangement. It can readily be prepared by the oxidation, exfoliation, and subsequent reduction of graphite. Graphene is characterized by its unusual electronic properties: It conducts electricity and is rich in electrons that can move freely across the entire layer (delocalized). In aqueous solution, graphene can bind positively charged ions with its electrons (Lewis acid-base interaction). This property is used in graphene-based processes to remove lead ions and organic dyes from solutions.

This phenomenon inspired researchers working with Qunwei Tang to use graphene electrodes to obtain power from the impact of raindrops. Raindrops are not pure water. They contain salts that dissociate into positive and negative ions. The positively charged ions, including sodium, calcium, and ammonium ions, can bind to the graphene surface. At the point of contact between the raindrop and the graphene, the water becomes enriched in positive ions and the graphene becomes enriched in delocalized electrons. This results in a double-layer made of electrons and positively charged ions, a feature known as a pseudocapacitor. The difference in potential associated with this phenomenon is sufficient to produce a voltage and current.