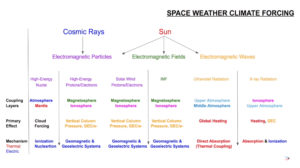 It is vital for the oil and gas industry to gain a common consensus about climate change, global warming and the contribution of oil and gas. Like nothing else this impacts the industry, as well as coal oil sands mining.

Let’s first face one indisputable fact, the climate changes, it always has and it always will! The earth has been warmer and the earth has been colder. Climate change is not a new phenomenon that has just been thrust upon us in the last few decades. It is a fact of life on planet Earth. In recent recorded history we had decades of winter temperatures so cold in Europe that the Thames River and the whole Baltic Sea froze solid and people were ice skating in Venice, and that was only 200-300 years ago.

There have always been short and long period climate variations and there always will be. So why all the hype around climate change? The first question to ask is where did all this come from and what was the science behind it? In my opinion the origins can be traced back to two sources, lobbying from the environmental activists and imaginative documentaries based on false inconvenient facts.

Remember this was not first revealed as climate change but was called ‘Global Warming’. At the time these had some science behind them but both were excessively exaggerated for political gain. Today that has morphed from a scientific ‘fact’ into an ideology that allows activism for activism’s sake and inconvenient information for profit.

In fact the term ‘global warming’ was dropped in favour of ‘climate change’ when the global warming narrative started to be soundly debunked. Regardless of the name, the blame for all this was placed squarely at the feet of that evil destroyer of the planet, Man!

What has happened is society has changed to accommodate these ideologies. Governments have implemented policies and laws because of this ideology and industry has retooled and stopped developments in areas now deemed to be incompatible with that ideology.

But what are the facts now? Science continues to develop in spite of the scientists who, in order to obtain funding, establish a desired outcome of the research then devise a research programme to obtain that outcome so that they can get funding. Funding providers are happy as long as they see keywords like ‘global warming’, ‘climate change’, ‘environmentally sustainable’ etc. But in many cases the science is not real.

Fortunately there are good scientists out there that are doing cutting edge research, and what they have found has overturned the old paradigm. The whole ‘global warming’ narrative started with an analysis of what factors affect the Earth’s climate and things like, oil and gas, transportation and Carbon Dioxide (CO2) emissions were quickly postulated and unquestionably accepted as the cause.

In the wake of this the UN’s Environment Programme created the Intergovernmental Panel on Climate Change (IPCC). The function of that body was to report on the science and research around our climate and give an assessment of the future state of the climate making recommendations for future research. The assessment included the modelling of many elements but there was still a large part of the model that was due to an ‘unknown’ cause, but no one knew what that was. That the activity of man was the answer to the unknown was readily seized upon by ideologically driven groups because it supported their cause, politics or pocketbooks.

So what has now changed? After much work and the pressure of numerous honest scientists the IPCC has finally revised its climate assessment model. The new parameters were introduced in 2019 but the report will not be released until 2022. The key factor is the old model included solar irradiance, or the amount of electromagnetic waves such as ultra violet and infrared radiation coming from the sun, but ignored all the other radiation as not having an effect on climate. This has now been disproved by our new understanding that the solar system and the cosmos are electromagnetic and particles both from the sun and the cosmos must be included.
Welcome to the Electric Universe.

This is called Total Solar Forcing, and when that is factored into the assessment the ‘Unknown’ almost goes away. It reveals that if there are any of Man’s activities which have a real effect, its contribution is minuscule compared to that of the sun and cosmos. Just as it is now known that the CO2 emissions by man are less than 1% of total natural emissions, the updated climate model is expected to show man’s contribution to climate change to be at similar levels, or less.

So, fossil fuels, driving our cars, commercial airlines, shipping and transport are not the cause of global warming or any kind of climate change. Governmental remedial actions such as Carbon Credits are only another form of taxation. Sequestering CO2 through Carbon Capture and Storage (CCS) can only have a negative effect of the environment because it is removing a vital source of food for plant and marine life at the base of our food chain. Every carbon policy currently being enforced by Governments world-wide is actually harming the environment and destroying businesses and vital energy industries such as oil and gas.

The oil and gas industry has to push against the climate change alarmists, but do so with sound science. Fortunately, through the actions of real scientists writing in peer reviewed journals such as Nature, and the army of professional and citizen scientists in organisations like Suspicious Observers, the evidence is now there to overturn the ideologies holding the oil and gas industry, energy businesses and the citizenry, to ransom.