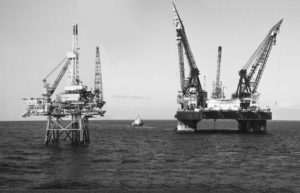 The Green lobby has demonised oil and gas hydrocarbons with persistent claims of the harm it is doing to our environment, but the reality is quite a different story.

Firstly let’s put one thing to bed. Oil and gas, out of the ground, is not a result of the decomposition of dead dinosaurs. It is not a fossil fuel! Early (Circa 2009) research showed that hydrocarbons are formed by chemical reaction at the interface of the mantle and the crust. (1) Oil and gas is made constantly and permeates into the sedimentary layers of the Earth’s crust where it gets trapped and becomes reserves waiting for man to exploit. Oil and Gas is truly a renewable resource as operators have found when depleted reservoirs have been seen to refill.

Renewable energy, wind and solar mainly, have proven to be uneconomic and very short term. The massive wind arrays are expensive and quite frankly some operators have found them not worth repairing when they break down. If you were to remove all the government subsidies from renewable energy initiatives they would never get built because they simply can’t compete. Our society has had the wool pulled over its eyes by the green / sustainable / renewable ideology. Like all ideologies it is not grounded in firm undeniable facts but rather fantasy ideals for a world utopia they can never achieve. And they never will, while they stay within their fantasy bubble.

A recent and very interesting documentary has laid bare this ideology and cries out ‘The king has no clothes’. It is called “The Planet of the Humans”.(2) Whilst there are parts I totally agree with and parts I don’t, what I really think this documentary is highlighting is the need for a different approach to energy and environmental matters.

Understanding the origins of the driving ideology behind all things green and sustainable we can see that the green movement came out of a communist / socialist world view. Early environmental activists were basically terrorists and grudge bearers against certain corporate entities. One such group started out by bombing petrol stations in Germany and today have spread world-wide, with their only instrument of change being the illegal boarding and damage to oil and gas vessels and facilities.

To move forward as a society without the conflict two things must happen. Firstly the environmental ideology must accept that oil and gas is not the epitome of evil they think it is. I remember the shock horror at the Iraq’s blowing up of oil wells during the Gulf war. The environmentalists were claiming the total destruction of The Gulf, and maybe the Indian Ocean. The sterilisation of the ecosystem for decades or even hundreds of years. The truth of it? The area recovered very quickly, as it has for all of the so called environmental disasters that have happened over the years.

The green ideology now hangs its hat on global warming, now debunked and so it’s called climate change, blaming CO2 from the use of hydrocarbons as the culprit. But again, that is being proven to be false. Peer reviewed scientific studies and climate modelling using all the recently discovered factors like Solar Forcing have shown that the contribution of man-made CO2 to the atmosphere is negligible.(3)

The second thing that must happen is for the governments and developers of oil and gas projects to be totally transparent in their operations. Oversight and inspections of oil and gas producers must be introduced, using independent bodies, to satisfy the public that oil and gas developments are being conducted properly. For the most part, in western countries at least, this is already happening.

Governments must not pander to the green ideology but get behind oil and gas as the renewable energy, now and of the future embracing all the many scientific discoveries in the refining and use of hydrocarbons that make the product cleaner and more energy efficient. The position of New Zealand’s Labour Government is reprehensible. Banning outright all future exploration and development thereby robbing the nation of a resource that could make New Zealand an economic powerhouse.

The greens must stop the confrontation, the war they wage on hydrocarbons, and the producers must embrace all the environmentally sound technology which will enhance both their product and society as a whole.

Everyone must approach the use of resources as a good steward, which is simply a common sense approach, caring for our environment and caring for our society. That way we can have the best of both worlds, clean low cost renewable energy from hydrocarbons and the land and seas protected as they should be.

I am hopeful for a new dialogue and partnership between oil and gas, society and the environmental interests to together develop the hydrocarbon industry of New Zealand.