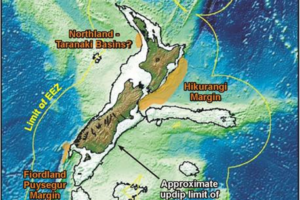 New Zealand has a massive resource available under its oceans, that is natural gas or gas hydrates. It is estimated that just one area off the East Coast, Coromandel to Kaikoura, called the Hikurangi Margin has about 50,000 SqKm of gas hydrate resource. When you look at all the offshore sedimentary basins  around the country within the Economic Exclusion Zone (EEZ) that are designated as potentially containing gas hydrates, we are looking at an area two or three times the size of New Zealand itself. Then there are the extensions of these basins beyond the EEZ.

This massive resource, not including crude oil or gas condensate fields, is a major economic resource which could be tapped, were it not for the Labour Government’s policy banning new exploration and production. That is a massive resource that the people of New Zealand are being denied the benefit of. It is strange that any government should ignore the one thing that could make New Zealand a wealthy nation like Norway, but then that is the radical environmental ideology in operation.

It has been argued that the problem in New Zealand is that the domestic market is not large enough to justify the infrastructure necessary to distribute the gas. That may well be the case, but if the hydrates were used to generate electricity at the source of the extraction, then the deliverable product is electricity, and we already have infrastructure for that. Alternatively, what about export markets? We have the capability to run a pipeline across to Australia, or tanker it to Chile which imported 78% of its natural gas in 2015 and uses 163 Billion cubic feet (Bcf) annually.

Add to that the advances in recent years and even in the last few weeks of the capability to make natural gas much cleaner and more efficient (See last week’s article “Clean Green Natural Gas”). We have an energy source that could beat any renewable energy alternative hands down.

We can’t just go get all the gas hydrate we can find though. That is because it is found naturally in an ice like structures where the gas is surrounded by water and forms its ice like structure under a combination of pressure and low temperatures. Extraction is by heating the hydrate to release the gas from the water. This can have the effect of inducing severe instability in the strata in which it is found and can result in underwater landslides and slips which may produce tsunami’s. This has been recorded as having happened naturally along the New Zealand coast due to geological or geothermal forces. This is the reason why the Hikurangi Margin, though a large resource, may not be viable from the point of view of being a wise activity given the potential harm.

That should not however, mean that we close our minds completely to the use of this resource, but we do need to be circumspect about where we carry out our resource extraction, looking for areas which can be assessed as low risk. That will require a lot more research, seismic surveys and exploratory drilling, but it is research that should be undertaken now so that we can develop that resource in an ethically, morally and environmentally sound manner in the future.