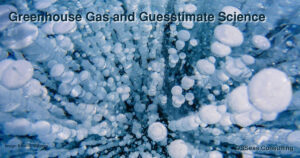 Is science following the scientific methods or just guesstimating the greenhouse gas impacts?
I always thought that the scientific approach was to formulate a hypothesis, devise a means of testing that hypothesis, carry out experiments to test the hypothesis and repeat until the preponderance of the results confirms the hypothesis. If confirmed you can formulate a theory which is then subject to peer review and independent testing to confirm the results of the original testing (repeatability). But it seems to me that modern climate science is based on guesses more than it is based on science.

A paper out last December from MIT on the problems of quantifying emissions of the so called ‘greenhouse gas’, methane, has I think highlighted the paucity of good hard evidence for the effects of methane and greenhouse gases on global temperatures and climate change. That paper is:
“The uncertain role of natural gas in the transition to clean energy”
16/12/2019 Massachusetts Institute of Technology (MIT).

It also shows the alarmist positions of much of our so called science in this regard. This article is resplendent with little diamonds of admissions that they really don’t know what they are saying when it comes to climate change, greenhouse gases, and the whole green agenda. Natural gas, mainly methane, is seen as a “bridge fuel” with the aim of helping “the world move away from the greenhouse gas emissions of fossil fuels”. Note that hydrocarbons in the earth are not dead dinosaurs, it is a naturally occurring chemical reaction, so let’s dump the term ‘fossil fuels’ and replace it with “Hydrocarbons”.

The second paragraph paints an alarmist picture of methane escaping from every link in the supply chain then immediately admits that they don’t know how much or how often this is occurring. “Recent studies have documented the difficulty in even measuring today’s emissions levels.” They go on to say that “…methods of controlling methane leakage would have to improve by anywhere from 30 to 90 percent.” Make the range big enough to cover any possibility while we make huge guesses as to the amount of “fugitive emissions” there actually are. MIT states “Given current difficulties in monitoring methane, achieving those levels of reduction may be a challenge.” It is easier to calculate the amount of methane gas trapped in frozen bubbles in Lake Baikal than it is to measure ‘fugitive emissions’. Imagine, all that frozen methane being released in the spring thaw!

The article goes on to say that “Fugitive emissions can be escaping all the way from where natural gas is being extracted and produced, all the way along to the end user,” and, “It’s difficult and expensive to monitor it along the way.” We have escaping methane everywhere, and that’s not counting the world’s massive bovine population. So we have the difficulty in tracking and measuring methane losses to the atmosphere. Researchers are “unsure how much there is and where it is”, so how can policy makers devise sound legislative boundaries within which humanity must operate. They say that, “This study’s approach is to embrace the uncertainty instead of being hamstrung by it,”. In other words, let’s make some guesses (sorry that should be ‘scientific assumptions’) and formulate punitive laws that restrict the economy and penalise business to make a few dollars in carbon taxes. The New Zealand Labour Party’s ban on all new hydrocarbon exploration or development is a prime example of this.

All this for what we must recognise is the pursuit of a Unicorn called “Greenhouse Gas” or “CO2  emissions”. We know that methane gas breaks down in the atmosphere to CO2 and H2O, both of which are plant food. It is reported that during the Cambrian plant life explosion the levels of CO2 were thousands of times greater than today. I quote The Lavoisier Group
“The killer proof that CO2 does not drive climate is to be found during the Ordovician-Silurian and the Jurassic-Cretaceous periods when CO2 levels were greater than 4000 ppmv (parts per million by volume) and about 2000 ppmv respectively. If the IPCC theory is correct there should have been runaway greenhouse induced global warming during these periods but instead there was glaciation.”

The world is now in a CO2 drought and our green advocates re-forestation efforts are severely hampered by low CO2 levels. Those levels also affect the abundance of phytoplankton which affects the krill which feeds the whales. The whole oceanic food chain may well be severely stressed by the lack of CO2. But there is money in Carbon! Tax credits that can be traded as commodities and business expenditure to meet legislated targets based on poor climate science helps to feed the government coffers, never mind the trees!

We now know that our Sun can sneeze and deliver to earth every element on the Periodic Table. The galactic plasma electromagnetic universe that we live in presents a more clear and present danger than any climate science alarmist rhetoric. We have to get our science institutes onto a proper scientific method basis by funding real experimentation on sound hypothesis which are not full of climate ideology keywords giving results which have little factual, repeatable, experimental evidence.